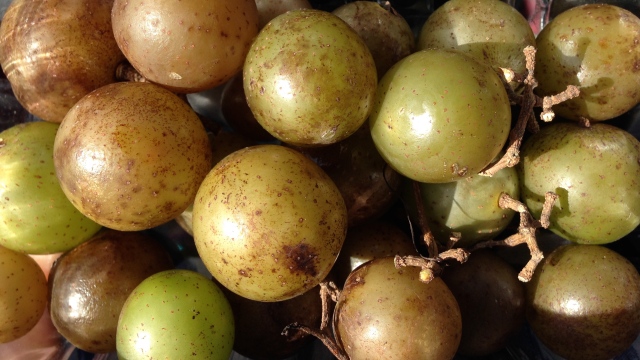 I was surprised while shopping last weekend to find scuppernongs at Whole Foods. While reading To Kill A Mockingbird every spring at school, the students always ask what a scuppernong is. Harper Lee uses the term at least three times. I have googled it, and though clear it is a fruit, it has never been a satisfactory explanation because none of us has ever eaten one. Hence my pleasure at discovering them at the store.

Scuppernongs are grapes on steroids. They are quite large, almost the size of small plums. Their skin is bronze to light green, thick and bitter, but if you bite the stem end, the skin splits and easily comes off the pulp inside. There are three or four seeds in the middle too. In fact, they are like a concord grape, but much much larger and much milder. Thomas Jefferson gave the state of North Carolina credit for producing “the first specimen of an exquisite wine [Scuppernong],” and praised its “fine aroma, and chrystalline transparence.”

Scuppernongs are an indigenous southern fruit from North Carolina but now pervasive throughout the south. They were first discovered by the unsung Florentine explorer Giovanni de Verrazzano in 1524, the first to explore the eastern coast of North America since the Vikings. Amadas and Barlowe, Sir Walter Raleigh’s explorers, wrote in 1585 that the scuppernongs were so prolific that a “like abundance would not be found [anywhere].” Originally called the “big white grape,” their name comes from the Scuppernong River in North Carolina which comes from an algonquin word ascopo, meaning sweet bay tree. It is the state fruit of North Carolina.

There are three places I remember in To Kill A Mockingbird where scuppernongs are mentioned— once when Mrs. Dubose in her drugged state tries to rile Jem up— “Jeremy Finch, Maudie Atkinson told me you broke down her scuppernong arbor this morning. She’s going to tell your father and then you’ll wish you never saw the light of day!”  When Scout and Jem discover the indian head coins in the knot hole in the tree, Scout thinks, “Finders were keepers unless title was proven. Plucking an occasional camellia, getting a squirt of hot milk from Miss Maudie Atkinson’s cow on a summer day, helping ourselves to someone’s scuppernongs was part of our ethical culture, but money was different.” And finally, Scout, when she has been temporarily abandoned by her brother and Dill in summer play and spending more time with Miss Maudie, says, “Our tacit treaty with Miss Maudie was that we could play on her lawn, eat her scuppernongs if we didn’t jump on the arbor, and explore her vast back lot, terms so generous we seldom spoke to her, so careful were we to preserve the delicate balance of our relationship…”

I shared my scuppernongs with my colleagues today. They were not impressed with their taste. They made faces. One ran to the garbage can to spit their mouthful out. I have to admit, it took me most of the ride home to master how to eat them without being overwhelmed by the bitter skin or biting into the seeds. By the time I pulled into the garage, however, I felt like a real pro.

So not only has To Kill a Mockingbird continued to offer food for thought, but now, also, a bit for the belly as well.