From uniform to pulp/ Battlefield to workshop/ Warrior to artist 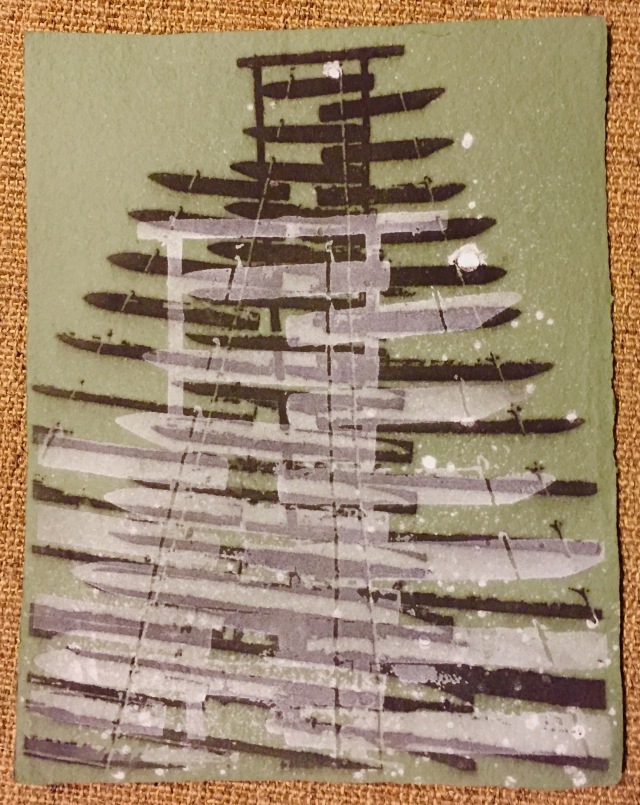 In the Lobby at Harris Theater last Friday, just before the theater was open for seating for the World Premier of My Lai, a table was set up displaying hand-made paper, some of which had been stencil-printed. It turns out the man behind the table, Drew Cameron, was hired by the composer of My Lai, Jonathan Berger, as a creative consultant. Cameron is an Iraq war veteran and is one of the founders of the Combat Paper Project.

Cameron takes military uniforms, cuts them, pulps them, and turns them into paper. This  project is designed as an outreach to vets and has spread to many sites throughout the states. Cameron said in 2007, “The story of the fiber, the blood, sweat and tears, the months of hardship and brutal violence are held within those old uniforms. The uniforms often become inhabitants of closets or boxes in the attic. Reshaping that association of subordination, of warfare and service, into something collective and beautiful is our inspiration.”

The green paper in front of us on the table was made from military uniforms worn in the Vietnam War. The whitish paper was from Iraq/Afghanistan American military uniforms. The stenciled image on the green paper was based on the Vietnamese musical instrument called the Trung (see above), which is a kind of xylophone made out of sharpened bamboo sticks. This was one of the instruments so beautifully played by Van-Anh Vanessa Vo in the performance of the opera we were about to see. During the Vietnam War these Trung were used by the Viet Cong to cover traps and holes.

We wanted to purchase one of the stenciled prints and were told the cost was $50. A short man came up to the table and asked Cameron how much the unstenciled sheet of paper was.

“But there is no image on it.”

The short man continued, “Fifty dollars with nothing on it?”

“It’s somebody’s uniform. A lot of experiences in that uniform. It’s a portrait of someone.”

Transformation is offered to participants on the Combat Paper’s website:

From uniform to pulp
Battlefield to workshop
Warrior to artist