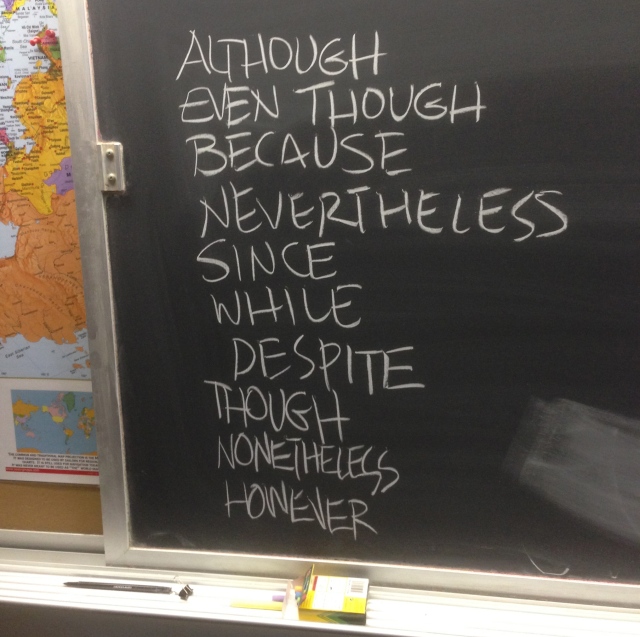 The students are presently working on their research papers. They have been reading about and exploring their topics for over a week and are starting to organize their ideas. Yesterday we talked about formulating a thesis. This concept is so hard for many of them.  I asked them to think about what it is they really want the reader to know about their topic. This is not the first time we have worked on creating a thesis. But this time, everyone’s topic is vastly different, so everyone’s historical subject/focus/point of view are different as well. It’s a bit more complicated.

This is also not the first time I have shared a list of subordinating conjunctions (and a few adverbs) that help writers to find something to prove or argue in a paper. I asked them to think about their topics and see if they could use one of these words (pictured above) in creating a sentence with a dependent and independent clause that reflected the information they have learned, the hope being to force them to articulate some contention/ commitment/claim that grew out of their research. I gave the students some time to work in class. Quietly, slowly at first, one by one, I heard enthusiastic requests. “Ms. Y come here. How’s this?”

“Is this a good one?” And one by one, it was clear that they were actually creating viable and meaningful theses.

“Wow! These are really magic words!”

Empowered, they walked out of the classroom and into the weekend.

A more complete list: After, Although, As, As if, As long as, As much as, As soon as, As though, Because, Before, By the time, Despite, Even if, Even though, Every time, How, However, If, Inasmuch, In case, In order that, In the event that, Just in case, Lest, Nevertheless, Nonetheless, Now that, Once, Only if, Provided (that), Rather than, Since, So that, Than, That, Though, Through, Till, Unless, Until, When, Whenever, Where, Whereas, Wherever, Whether or not, While