In the pursuit of happiness… 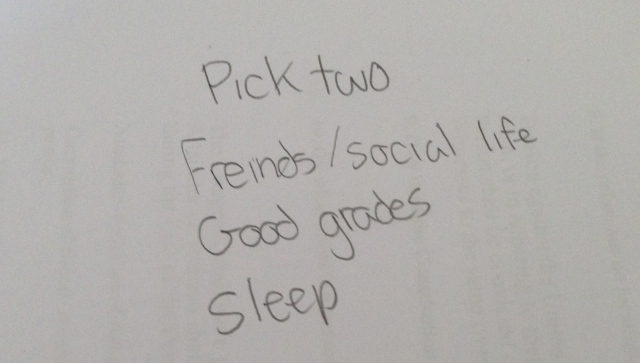 For the past month we have been studying the Constitution. We have looked at political philosophers like John Locke. We have examined the Declaration of Independence. We have unscrambled the Preamble and connected it to the weaknesses of the Articles of Confederation. We have read every word of the Constitution itself especially including the amended sections, like the 3/5 compromise, (unlike the redacted version read by Boehner’s House at the start of each congressional term). We will be examining the amendments next week and if we have time looking at some of the Federalist Papers before the Constitution test a few days before Thanksgiving. The students also have a huge constitutional project due before the test.

Because we get federal funding at our school we are mandated to give a Constitution test and according to law, the students cannot graduate unless they pass this test. The pressure is definitely on. I don’t think they have ever felt they had so much riding on a single test. The truth is, in fact, that the test is very easy, but they are still panicked and more focused than I have seen them so far this year. In the process of preparing for this test, they are learning to take careful notes (some more successfully than others), review flashcards, and use the information they are learning in meaningful ways (including connecting to many contemporary issues that relate to interpretations of the Constitution).

Yesterday in the midst of a discussion about whether the judiciary is as despotic as Thomas Jefferson noted, GL stated loudly, “I think the Constitution test is unconstitutional because it is preventing me from pursuing my happiness.” We all cracked up (Yes I know,  the “pursuit of happiness” is in the Declaration, not the Constitution).

At the end of class GL showed me a piece of paper (posted above). “This is my life,” she said.