The lynching of Emmett Till 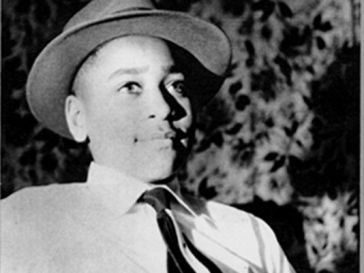 59 years ago today, Emmett Till (1941-1955) was murdered in Money, Mississippi. From Chicago, Till was visiting family in the area. His supposed crime was that he had “flirted” with a white woman, Carolyn Bryant, the wife of the owner of Bryant’s Grocery Store where Till and his friends were purchasing candy. Till’s murderers were the white woman’s husband, Roy Bryant and his brother, J.W. Millam. In the trial which followed, both Bryant and Millam were acquitted by the all-white jury and in an interview for Look magazine a few months after the verdict, both confessed to kidnapping, torturing, mutilating, and murdering Emmett Till.

Emmett Till’s mother, Mamie Till Mobley, had a public funeral with an open-casket so the world could see the brutal treatment her son had suffered. This caused a great deal of world-wide support and anger and is often considered the important trigger of the civil rights movement. The outrage fostered by the murder of Emmett Till galvanized people across this country, white and black, to work to end Jim Crow, and to establish laws with real teeth that embraced people of color as genuine participants in this democracy. One result of this work was the Civil Rights Act of 1964 followed a year later by the Voters Rights Act (recently eviscerated by the Supreme Court).

The events in Ferguson earlier this month, along with the skewed incarceration rates of people of color, are more reminders of the equity, justice, and diversity work that still needs to be done. It is all of our responsibility to make sure that the civil rights of all people have constant vigilance and the laws which protect these rights are consistently enforced (the intention of the Fourteenth Amendment). This is the message of this anniversary of the lynching of Emmett Till.