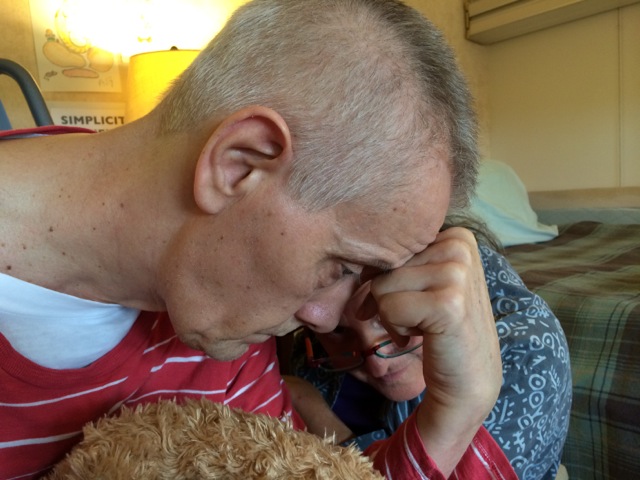 Yesterday I went to see Gregory at his Alzheimer care facility. Michael, his partner of over 35 years, was visiting as well and I brought each of them a no-foam skim latte. Gregory’s meds have been changed. His previous meds had caused him some stomach issues so they began two days ago to give him another, administered through a patch. This new med has made him quite chatty. Not that he made a lot of sense, but he sure had a lot to say.

It started with the coffee. With his eyes shut, he was happily groaning with pleasure with each sip. Then he seemed to be giving advice. “Just do it,” he said after some indecipherable words and with a great big smile on his face. Then he became sentimental. He was trying so hard to describe something. It seemed like a vision, something he was seeing and it was “beautiful.” Staring off into space, he said this innumerable times. “Beautiful. Beautiful. Beautiful.” His eyes watered. “I think he is really having some kind of sacred vision,” I said. “Or not,” Michael said softly.

At dinner, one of Gregory’s tablemates, Batya, said it was like there was a veil over her mind, that she couldn’t quite connect her mind and her body together. While sliding fully into the world Gregory experiences, she still has a foot planted on a scrap of personal awareness. Perhaps Gregory’s Alzheimers has pushed him into some sort of stage of enlightenment, a pure state of nirvana. Nirvana literally translates from the sanskrit as “extinguishing” and it is clear that some of his former neural pathways have definitely vanished. But perhaps this has allowed him to completely live in the moment, affording him sublime visions of beauty and wonder. Or perhaps he has simply become a playful seven year old again, filled with silly humor and innocence, without memory, tripping over his words.

(Michael’s description of this same visit is on his blog. He also took the photo at the top of this post.)

2 Responses to Or not