I remember when they first opened just a block away from their present site. IB was just 5 or 6 years old and would often run around the floor when we would go there to eat. Our friends love to tell the story of him doing this with lots of rice in his hair. JB was not excited at first about patronizing the restaurant, but at our very first meal, we were hooked–great food, reasonable prices. (And they didn’t mind 5 year olds running around with rice in their hair.) Laura Van Dorf was the chef then and her husband Dan Kelch ran the business end of things. 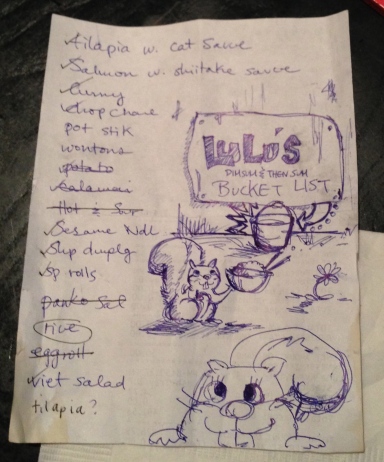 Fast forward 21 years– IB gets a job first as a waiter at Lulu’s and then as a waiter and bartender at Taco Diablo, another restaurant owned by Dan Kelch, just down the street. The little guy running around on the floor with rice in his hair was now making margaritas.

When Taco Diablo burned down right after Christmas, everyone’s plans changed. Kelch had already at that time leased the space where Lulu’s is to another restaurant. He had planned to close Lulu’s and just keep Taco Diablo open. After the fire he became restaurantless.

We were at Lulu’s for their last evening of serving food two days ago. They were running out of everything. No sesame balls. No spring rolls. No sake. We ordered whatever they had left.  Luckily the potato croquettes, the coconut shrimp, the green beans, and the tempura salad with ginger dressing was still available.