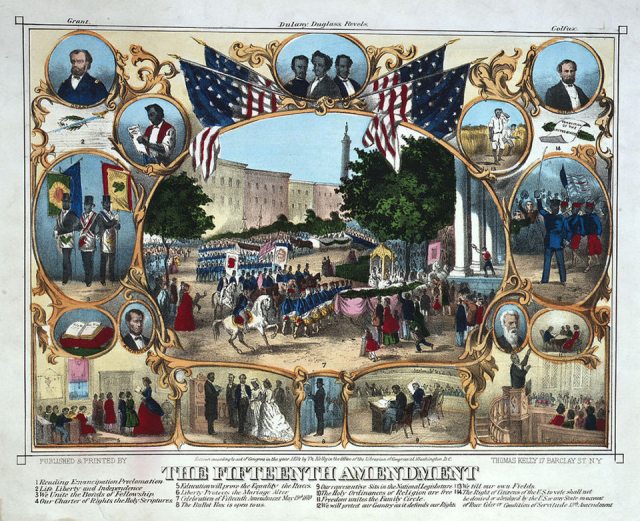 Today is the anniversary of the ratification of the Fifteenth Amendment in 1870, the amendment securing the right of black males to vote, though the word black is not mentioned in the amendment itself.

During Reconstruction, the period right after the Civil War, the Thirteenth Amendment abolishing slavery and the Fourteenth Amendment granting citizenship to all who are born here were ratified. Though the Reconstruction Acts passed by the Radical Republicans in 1867 required confederate states to include black male suffrage in their reconstituted constitutions, the majority of northern states still continued to deny blacks the right to vote. This hypocrisy truly riled the white south.

In 1867, the Republicans’ once large lead over the white supremacist Democratic party was shrinking, threatening a loss of their control of congress. The Republicans felt if they could make sure that blacks could vote in all the states, their hold on power would be maintained, especially since blacks would more than likely support the party that fought for their rights and especially their suffrage. However, many northern whites were against blacks voting in the north, several states actually passing laws against it. In May 1868, at the Republican convention, Ulysses S. Grant was nominated as president of the United States. It was decided that the party platform would continue to require southern states to allow black suffrage, but it would be left up to the northern states to decide for themselves whether blacks should vote or not.

Grant, though very popular, won the presidency by a very small margin which meant to Republican leaders that black suffrage was essential to their maintaining majorities in both houses of Congress. At the beginning of 1869, the Republicans with a majority in a lame duck congress, introduced the Fifteenth Amendment after several months of debate and revision.

Section 2: The Congress shall have the power to enforce this article by appropriate legislation.

Three-quarters of the states, 28, of the 37 states were needed for ratification. Since the 11 southern states were run by Republican Reconstruction governments, the Republicans were assured of ratification there. 17 border, western, and northern states complied in support of the amendment, with Georgia being the 28th state to ratify in February of 1870.

Jubilation over ratification was, of course, short-lived. In the south, violent groups like the KKK intimidated blacks who voted, their homes burnt, their families hurt or killed. Literacy tests, not given to white voters, were employed as well as poll taxes and grandfather clauses instituted. In Mississippi in 1867, 67% of the black male population was registered to vote, by 1892, only 4%. It wasn’t until 1965 that the Fifteenth Amendment would truly be enforced through the Voting Rights Act.

This anniversary is yet another reminder about the commitment on the ground needed to ensure civil rights. Any laws can exist, but such laws are powerless without the vigilance required to enforce them. It’s also a reminder that understanding the motivations for the support of civil rights is not always simple, straight forward, or pure.