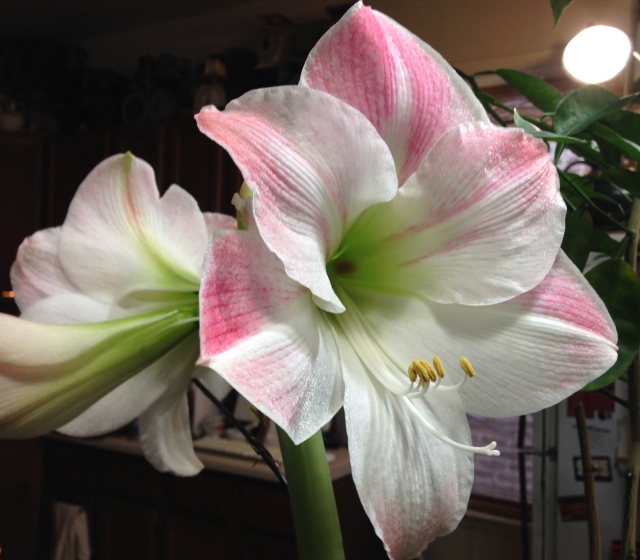 The bitter chill of winter is  balanced by the blooms of amaryllis. Every year they assertively bloom on our kitchen table reminding us that spring will indeed one day be here again.

From Virgil’s Eclogues, we learn that the amaryllis is named after a shy shepherdess, named Amaryllis, who fell in love with Alteo, as handsome as Apollo and as strong as Hercules. Alteo really only cared for his flowers and plants and scorned all those who adored him. He announced that he would only give his heart to the one who discovered a new and amazing flower. Amaryllis visited the Oracle at Delphi for advice and learned that she needed to stand at the doorway of Alteo’s house each night, call his name, and if he didn’t respond to take a golden arrow and pierce her heart.

For twenty-nine evenings she pierced her heart and on the thirtieth, Alteo finally opened his door and where the blood from her heart spilled, beautiful flowers grew, which, of course, she offered to Alteo. Some versions of the myth have them sharing their first kiss at this moment. Other versions have her dying from so much loss of blood. Nonetheless, both versions have to do with the heat of passion. Anything to melt frigid and warm up these chilly days.

Denise Levertov has the bold, self-confident, assertive, and insistent blooming of the amaryllis right on target in her “The Metier of Blossoming”: