I have two very kinesthetic students. They are also very charismatic so when they get to tapping or drumming or banging on their desks, it moves others to join in the percussive activity. I know these two students are actually very well-intentioned and don’t really mean to be disruptive in any way. It’s just that sometimes, well, they can’t control themselves.

Both of these students are also in my advisory where I showed them and the rest of my advisory the German short film “Music for one apartment and six drummers” (top). All the students, but especially my bouncing two, were riveted. It was then that they all organically decided that we needed to make a video like the one we just saw.

“Yeh, something like ‘Music for one school and 14 drummers.'”

Then they began to riff on the many ways they might be able to accomplish this and the possible places in the school that would work best.

At first they all sat around the big table in the room. TM started the beat and then each joined in, mostly tapping the table and clapping their hands.

“You have to feel the beat,” KN said. “Really listen and add the rhythm where and when it feels right.”

And then they started to get up from the table and the real rhythmic creativity began. They grabbed staplers and torn paper and the box of push pins. Someone put a rubber band over a a clipboard. The pencil sharpener, a large stick stashed in the corner, the tall metal waste basket became instruments. Cabinet doors, chalk erasers, chalk on the board, chairs– all became noisemakers, including my particular favorite– masking tape repeatedly being pulled from off a desk. They took turns beginning the beat and truly worked at listening to it, finding a rhythm that complimented the whole. 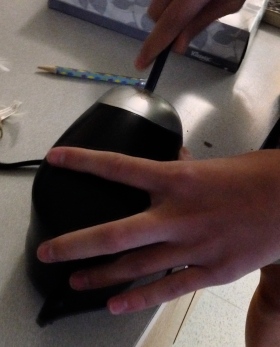 When we made the video, they said that they wouldn’t take any “instruments” with them, but would need to be able to make rhythms with items they found at each site we would visit. They would need to be imaginative.

“We have to keep this a secret.”

“Definitely. We will seriously plan this out next week.”

The extended period for advisory was over and it was time for the first class of the day. Sure enough, TM and KN started percussing on their books. Smiling, I winked at them, put a finger to my mouth and softly said, “Shhh.”

They haven’t beat a rhythm in class since.

1 Response to The rhythm method