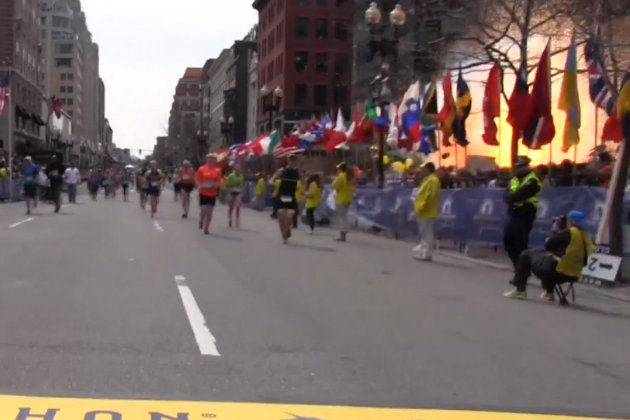 I talked with my students today about the Boston Marathon. AW’s dad was in the race and had crossed the finish line 25 minutes before the first blast. “Whoa. You’re kidding!?!”

BR said she was happy we live in the midwest because most of these kinds of things happen on the east coast. “Really?” replied BN. “What about the Oklahoma bombings?”

DT was pretty outraged in his denouncement of “this senseless act. Who would do something so awful?” FD started to debunk rumors and stories some may have heard like the runner who had planned to propose to his girlfriend at the finish line and then was killed.

“C’mon. Where did you hear that? Fox News or what?”

“Well, one thing is for sure. Somebody got some training somewhere to make those bombs.”

“Hey BK, you only need to get on the internet to learn how to make anything. You don’t need any training. It’s easy to make a bomb.”

“Watch it, TB. This is the part where the camera zooms in, right? Like as you speak those words and the class laughs and then the camera pans to your bedroom filled with all sorts of bomby stuff.”

“Weren’t there 2 more bombs that didn’t go off?”

“No, that was all debunked too. And the JFK Library was an electrical fire not a planned bomb.”

“Well, couldn’t someone have planted a small bomb that would have triggered the electrical fire?”

“Wait a minute. I heard that for sure there were 2 more bombs that didn’t go off.”

“And there were all these events that connected to the timing of the bombing like wasn’t there an anniversary of this cult thing in Texas somewhere– suicides and fire? And why did the bomb go off when it did, when the most people would be there?”

“Lots of people had a leg amputated. And lots of shrapnel.”

“The one kid who died was 8 years old.” MN shook her head.

And so it went. Almost a perfect microcosm of the talk on the media and in the hallways in school. I assured them that I just wanted to make sure they were alright and that we needed to wait to get clearer information before we continued this conversation or came to any conclusions. When we turned our attention back to our classwork, to the causes of World War I, and discussed the arms race and the new high tech of that war, I was struck by the perverted madness of anyone believing that violence and death can make any cause move forward.