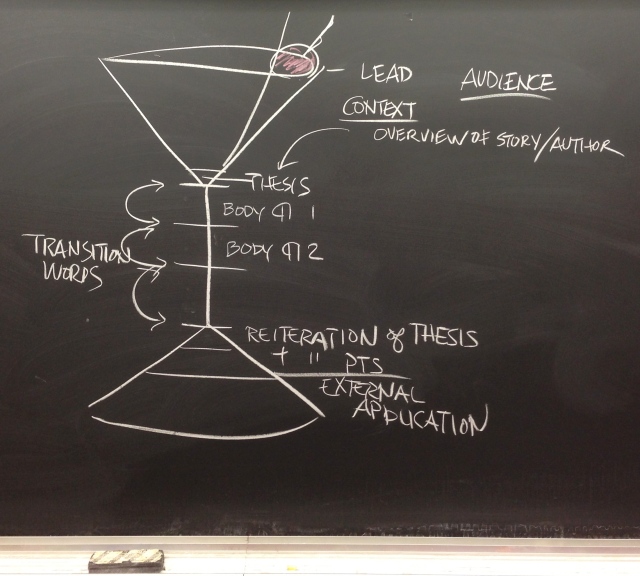 Class started out with a discussion of the structure of argument and essay. I explained that though I was obligated to teach this prescriptive format, the idea was that at some time in the future, years from now, once the students had totally integrated this specific structure they could break the rules, but they needed to learn the rules first. I even read Bradbury’s epigraph in Fahrenheit 451 by Juan Ramon Jimenez, the book we are reading next, which says, “If they give you ruled paper, write the other way.”

On the board I drew a funnel shape at the top and an opposite funnel shape at the bottom, a line connecting the two funnels. The funnel at the top represents the way an introduction works with a broad approach at first, articulating context, focusing down to the specific thesis to be proved in the essay. The bottom funnel is the conclusion which reiterates the thesis and the specific points made in the paper and broadens out to an idea external but connected to the story itself. The line between represents the body paragraphs.

That was when JG said, “That looks like a martini glass.” I put the finishing lines at the top and bottom and of course the stir stick and cherry posing as an olive were the finishing touches. The students were amused.

I’m not sure my students learned to structure their essays any better today, but I know they will never forget the writing recipe for the five paragraph martini.