No hiding in Hyde Park 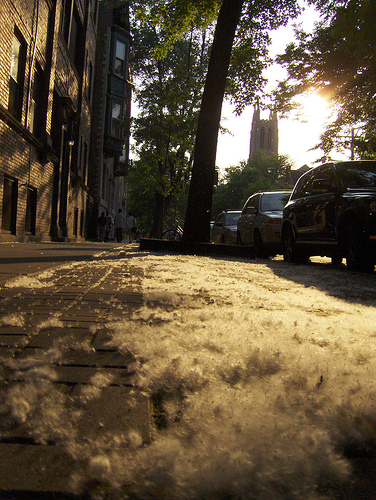 I left my gradebook at school (I have six more narratives to write) and my classroom needed to get cleaned up for summer school classes (I’m not teaching any, but others are using my classroom). So I bribed JB with a meal out in Hyde Park if he would help me. When we were halfway to school we saw the presidential helicopter and a marine helicopter over the lake, also heading south. “That must be the president,” JB said. “Or maybe Michele and the girls.” Around 47th street and the lake, the helicopters were just landing as we drove by (they were joined by two more marine ones). We were thankful to have beaten the possible motorcade.

We parked near school and walked to a nearby noodle restaurant. On the way, we ran into a former student who told us about his wanting to become a teacher. At the restaurant, with her sister and mother, was one of my students from this last year. We high-fived about graduating 8th grade.

“Yes, but have you ever thought about how convenient it would be, along with it being a pretty interesting place to live?”

As we left the restaurant, a colleague of mine who teaches computer science at the school was paying for some take-out. We chatted about summer plans. As I walked outside I ran into another former student, who had grown at least 10 inches since I last saw him and had become quite handsome, all of which I enthusiastically shared with him. I had also taught his sister and asked him to give my best to her as well.

On the way to the car to get the two wheeler to help us move boxes of stuff from the classroom, we ran into the mother of one of my former students who asked about IB and when he would be returning to the states. After JB and I cleaned the room and removed all piles, we ran into the computer science teacher again as we were leaving. This time she was with her kids and their two dogs.

By the time we got to the car, JB said, “OK, I get it. There’s no hiding in Hyde Park. It’s nice to have a little privacy.”

I mean, really. We even very nearly ran into Barack (or was it Michelle?).

4 Responses to No hiding in Hyde Park