Settling in with an old friend 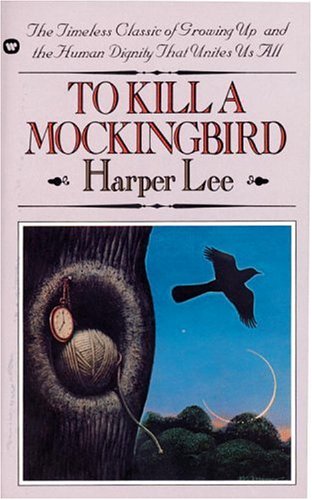 We have just finished To Kill A Mockingbird. It’s the last book we read every year and to tell the truth, each year I can’t wait to get to it. Not because it signals the coming of summer, but because it’s just such a good book.

It’s slow in the best sense of the word. It takes its time and as a reader you actually feel as if you’re really strolling the town of Maycomb, practically neighbors with the characters in the story. You can’t help but be sucked into the story, the characters, and the town. The narrative is told through Scout’s point of view. She is innocent but alert, filled with a great sense of humor and edgy observation. Her self-confidence and assertiveness, her tomboyishness, make her an incredibly appealing character. She is an outsider making inside observations. These insights about the behavior of the adults around her are funny, rich, smart, and sometimes questionable.

The story is solid and strong. The children (Jem, Scout, and Dill) are obsessed with a neighbor who never comes out (Boo). The trial of Tom Robinson, an African-American accused of raping a white woman defended by Scout’s father, Atticus, is clearly innocent but found guilty anyway. These two seemingly disparate story lines come together in a dramatic and thrilling confluence at the end of the book.

When this book came out in 1960, there were no books by whites that dealt with racism in such a genuine way. This book clearly and courageously addresses those issues. And it works because the book is so true. I’m still moved by the Reverend Sykes telling Scout to stand up because her “father’s passin'” and all the food that is left for Atticus the next morning after the verdict in Robinson’s trial. The scene when Scout walks Boo back to his house after the Halloween attack and she sees the world (and the outline of the entire book) through Boo’s perspective from his front porch is masterful as is her description of Mrs. Dubose’s face (“This made the wet move faster.”) and of Aunt Alexandra (“…analagous to Mt. Everest: throughout my early life, she was cold and there.”), the missionary ladies making bovine noises, and many more turns of phrase that are still stunning to read even after the umpteenth reading of the book.

It was not unique that our conversations in class about this book were character-driven, but perhaps what was unique was that the students really cared for a lot of the characters in this book. They really didn’t have feelings for Montag in Fahrenheit 451 or for Haroun in Haroun and the Sea of Stories. But somehow, this book made them experience feelings and what seemed like a genuine relationship with some of the characters. Understanding their motivations and intentions, understanding what they say and mean, became a virtual and visceral exercise in how the students themselves understand and work their own way through the world.

This book isn’t perfect. The black characters are not as developed as the white. When Scout asks Atticus if it’s OK to hate Hitler, Atticus tells her it’s not OK to hate anybody. When a mob comes to lynch Tom Robinson, Atticus explains their behavior as having a “blindspot.” Yet, the book still works. The characters still draw us into the soul of the story and push us to work for justice.

How wonderful it was to spend the last few weeks immersed in this book. It was like settling in with an old friend, who only visits each May, picking up right where we left off.

This entry was posted in books, writing and tagged books, Harper Lee, justice, literature, racism, To Kill a Mockingbird, writing. Bookmark the permalink.

2 Responses to Settling in with an old friend