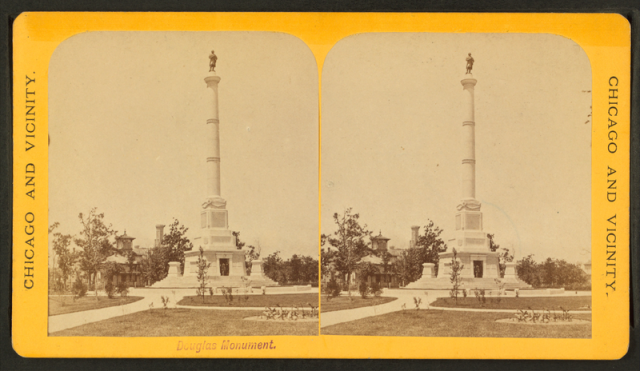 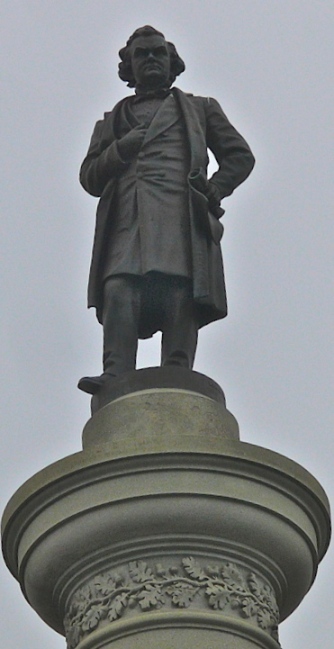 I pass it everyday on my way to and from work. In the morning it signals that I have only ten minutes left of my 40 minute drive. In the late afternoon it signals that it’s time to put my Learn-How-to-Speak Japanese disc in the CD player. In the back of my mind when I pass, I always say to myself, I should explore that site. I know it is Stephen A. Douglas (of the Lincoln-Douglas debates) atop that column, but have not taken the time to explore the monument. After all, in class we investigate what led up to the Civil War which helps to inform us about the period of Reconstruction. Stephen Douglas (1813-1861) played a prominent role in the attempt to hold the union together before the war, though he was personally an important factor responsible for its eventual rupturing, and died just a couple of months after the war began. A piece of the history we study in class is ten minutes from the door of my classroom.

The Compromise of 1850, which dealt with the newly won territories after the Mexican-American War, was skillfully managed by Senator Douglas to balance slave (south) and non-slave (north) interests. In the Kansas and Nebraska Act of 1854, with his intentions solidly behind democracy and the participation of the people’s voices in important decisions, he unwittingly opened the “wound” of slavery once again by supporting popular sovereignty in these territories to decide whether they should be free or slave states (and totally throwing the 36- 30″ of the Missouri Compromise under the bus). He was utterly shocked and stunned that the response to this Act was so violent, especially as supporters from both sides sent hordes of people to these territories to vote for one side or the other. “Bloody (very bloody) Kansas” was the result.

This column that I pass twice a day is his tomb. There is a small mausoleum at the foot of the column where he is encased in a marble crypt inscribed with his last words, “Tell my children to obey the laws and follow the Constitution.”

Today JB and I were actually on an adventure in search of a drycleaners on the corner of 35th and Cottage Grove where JB’s father used to work many many years ago, when we stumbled on Douglas’ monument, only a block away from our intended destination. Apparently this monument is the oldest monument in the state. There are four allegorical figures at the base of the column– Eloquence, Justice, Illinois, and History. There are also four bronze bas reliefs—America as Eden before the Europeans, Pioneers taming the “wild”, cities emerging with Chicago as hub, and finally civilization/ government/ debate with Douglas himself wielding a gavel. These and the figure of Douglas at the top were created by Leonard Volk, a sculptor responsible for the life mask of Abraham Lincoln and the casting of his two hands. Volk’s wife was a cousin to Douglas and was one reason he landed this commission, though he was already a well-known artist, serving as the director of the Chicago Academy of Design, the forerunner to the Art Institute of Chicago.

Leonard Volk's tomb designed by himself in Rosehill Cemetery

Douglas purchased 53 acres, which he called Oakenwald, near the lake on the near south side of Chicago in 1849, what is today the northeastern tip of the Oakwood- Kenwood neighborhood. At one point Douglas gave 10 of those acres to the old Chicago University (a forerunner of the University of Chicago when it failed in 1886) becoming its first president and then called his remaining land “Cottage Grove”, which today is the name of the street that runs a block west of the monument. After Douglas’ death from typhoid fever in 1861, the land became the site of Camp Douglas and later a POW camp for Confederate soldiers captured during the war. Soon after his death there were several, mostly abortive, attempts to build a monument to him in the southeast corner of his property. The cornerstone of this monument was laid in 1866 with a short speech by President Johnson, who happened to be in Chicago during his infamous “Swing around the Circle”, where he campaigned in mid-term elections against the ratification of the 14th amendment claiming he personally was being crucified on the “cross of radical Reconstruction”. His “Swing around the Circle” was a political disaster and so was the immediate raising of funds to complete Douglas’ tomb. It took another 14 years to finish.

Now the monument is surrounded by high rise buildings on the north and south and Lake Shore Drive to the east. It feels almost a quaint touch in an urbanized and low-income area. There are picnic benches leaning against a fence inferring some warm summer lunches beneath Douglas’ gaze. It is now only 2 1/2 acres, much diminished from its original 53, just like the stature of the Little Giant, as he was once called, who at one time was an eloquent shaker and mover in Congress (though misguided) and now is all but forgotten… that is, except on my drive to and from school.

Further information on this monument is here.

3 Responses to The Little Giant