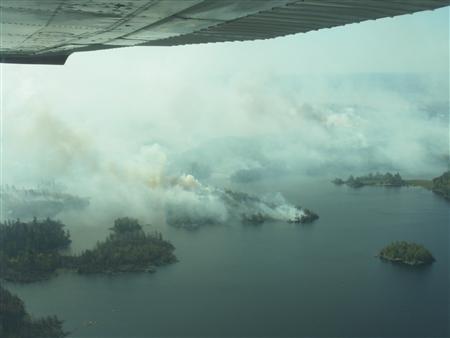 Yesterday I had several errands to run after school. At the first stop, an arts supply store, I smelled a burnt plasticky smell. At first I thought there was something wrong with the car.

At the next stop, several miles away from the first, the smell was back, but I had to park a block from where I was going and the smell–the same smoky, burnt, acidy smell– accompanied me all the way to and from the post office.

It was only on the news this morning that I realized I was smelling the forest fires in Minnesota, over 400 miles away! Incredible. As of this morning, 100,000 acres are burning just east of Ely, in northern  Minnesota in the Boundary waters, caused by a lightning strike on August 18. The Pagami Creek fire has been burning for almost a month. With a cold front coming south from Canada, the winds have become quite formidable which is why we were smelling the smoke yesterday and today.

If smoke from over 400 miles away can be smelled, even seen causing poor visibility in some areas of Chicago, even causing respiratory problems for the elderly, the sick, and the young, what impact on certain windy days does a polluting factory or cracked radioactive plant from far away, across oceans even (which might have no detectable smell at all) have on my community’s health? How many cases of Parkinson’s, cancer, cardiovascular or other diseases with environmental causes are connected to the quality of our globally shared resources on this planet? The World Health Organization reported a few years ago that “[A]s much as 24% of global disease is caused by environmental exposures which can be averted.” The report estimated that, “more than 33% of disease in children under the age of 5 is caused by environmental exposures.”*

The message is obvious. Accountability, unfortunately, is not.

4 Responses to Message obvious. Accountability not.