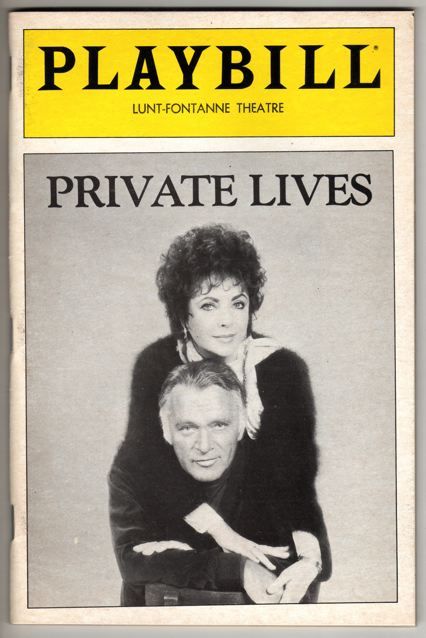 I actually met her once. I used to teach at the Chicago Academy for the Arts, first as an art teacher and then as a humanities teacher. In its struggle to stay financially afloat, the school was always working to solicit funds. I’m not sure how the connection to Elizabeth Taylor was made, but I am guessing that it had something to do with Essie Kupcinet, who was extremely active on the board of the school. She had many “Hollywood” connections, in part due to her husband Irv’s local TV show and his column in the Sun Times. She was also extremely passionate about the school, an Arts High School, as another way to commemorate her daughter, Karyn Kupcinet, a young actress who died mysteriously in LA in 1963.

It was the fall of 1983. Elizabeth Taylor was in town at the Shubert Theater (now known as the Bank of America Theater) for Noel Coward’s Private Lives, starring with Richard Burton , whom she had already divorced for the second time. Our school was located just west of downtown, and about 100 of us walked to the theater at the end of the school day. We entered the theater after a matinee and sat in the first few rows. Elizabeth Taylor came out and stood right in front of me.

Yes, indeed, her eyes were violet and dazzlingly beautiful. In the days before colored contact lenses, this was a most remarkable physical attribute. We presented her with some kind of trophy/ sculpture and flowers and she presented us with a large check. She said a few words. It was a very short meeting.

But I was in complete shock. This was reportedly the most beautiful woman in the world and I saw growing from her nostrils three big black nose hairs. I know she was drinking a lot in those days, but you would have thought someone would have mentioned it to her.

Well, I suppose the impossibly beautiful, so close-up, is always a bit frightening. We are all vulnerable. It is all so fleeting.