“Stuff your eyes with wonder…” 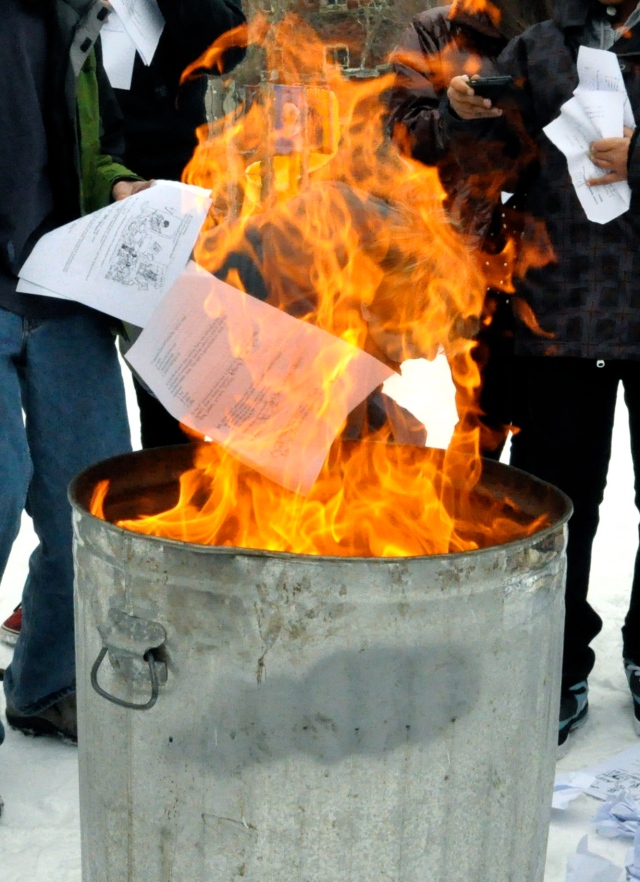 I don’t know if there is an actual written law about needing to get rid of the Constitution tests that the students take, but we don’t give them back to them. I guess this is done because next year’s students might get their hands on the test and therefore have an academic advantage. We usually shred them after the students have had a chance to look at them. This has always seemed a bit anti-climactic to me. After all, the students have spent at least a month crawling through the Constitution, piece by piece, analyzing parts of it, memorizing tons of information, vocabulary, concepts, and processes.  They have to pass the Constitution test in order to pass 8th grade, so there is some stress connected to all of this. However, it is considered an important and significant passage, both individually and as community.

Last year, after reading Fahrenheit 451, my students and I came up with the brilliant idea of burning the Constitution test. It just seemed so appropriate. All that fire imagery. All that transformative energy. It would definitely make a dramatic closure; a sense of hopeful resurrection after all the studying and work they had to do. And so it was that last year we did, in fact, burn our Constitution tests instead of my shredding them in the isolation of the middle school office.  It became an instant tradition. In fact, at the beginning of this year, specifically on day one, the kids asked me when we were going to burn the Constitution tests.

So, we have just finished Fahrenheit 451. Fire is fresh in my students’ minds. We have discussed the holocausts in this book and the paradox of fire, its ability to destroy, and its ability to warm and create. Today was the day. The building engineer accompanied us with a fire extinguisher (and a camera — these photos are his) and after a few words about fire safety, we were ablaze.

I think the students were really surprised at how intense the flames actually got. There was plenty of drama as the flames inside the garbage can flared, swallowing the pages as they put them in. My test is actually quite long (26 pages) so there was plenty of fuel. The morning class began to quote Bradbury after a bit. “It was a pleasure to burn” and  “It was not burning. It was warming.”

“Hey we look like Granger’s hoboes,” a student snickered.

Students in classrooms facing the fire, jealously peered out of the windows, totally disrupting whatever was going on in their rooms. The building engineer gave us a tattered flag to burn as well, assuring us that this was the proper way to dispose of a flag that had seen better days. The students were pretty amazed at this because we had previously spent quite some time discussing/ debating flag burning and first amendment rights. 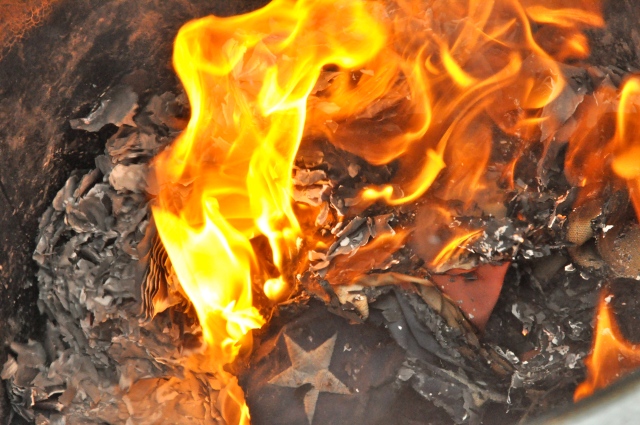 My afternoon class, always my more boisterous, brought marshmallows and pulled branches off nearby bushes to toast the event. We reentered school smelling like we had spent a week in the woods, feeling rather flush with excitement and as if some sort of catharsis had occurred. (Maybe because tomorrow is the last day of school before winter break had something to do with it.) As we piled back into the classroom this afternoon, after the fiery purging, there was a palpable feeling, something more akin to Bradbury’s words near the end of Fahrenheit—

“Stuff your eyes with wonder…live as if you’d drop dead in ten seconds. See the world. It’s more fantastic than any dream made or paid for in factories…”

4 Responses to “Stuff your eyes with wonder…”