“Sting me with the theremin, loudly.”

Making learning visceral, tactile, tangible is my goal as a teacher. So, of course, as we have just finished reading Fahrenheit 451, and have begun to unravel many of the allusions in the book, we just had to experience the theremin. Oh, did I mention I am personally intrigued/ obsessed with this instrument? This is one of the awesome perks of teaching—you get to explore these unique passions with young minds.

The theremin is an amazing technological musical instrument, the only musical instrument, in fact, that you do not touch in order to play. It was invented in early 20th century, just after the Russian Revolution, by Leon Theremin, who we now believe was probably a soviet spy. Though the physics of it are difficult for me to understand, the idea is that the closer your hand comes to the vertical antenna, the higher the pitch you can create. Your other hand alters the loudness by its proximity to a horizontal loop at the opposite end of the box.

I first learned of the theremin in a close read of Bradbury’s Fahrenheit 451. In the scene where Beatty, the fire captain, has spent an enormous effort trying to convince Montag of the “value” of their valueless society, of the importance of being “happy” and shallow all the time, of the “pleasure” of avoiding thinking and really feeling, he concludes, “So bring on your clubs and parties, your acrobats and magicians, your daredevils, jet cars, motorcycle helicopters, your sex and heroin, more of everything to do with automatic reflex. If the drama is bad, if the film says nothing, if the play is hollow, sting me with the theremin, loudly. I’ll think I’m responding to the play, when it’s only a tactile reaction to vibration. But I don’t care. I just like solid entertainment” (61). When I first read this many years ago, I thought the theremin was some kind of drug, though the word “loudly” always threw me off a bit.

Clara Rockmore (1911-1998), a child prodigy on the violin, is the earliest theremin virtuoso. She really worked to make this instrument a well-respected classical instrument. 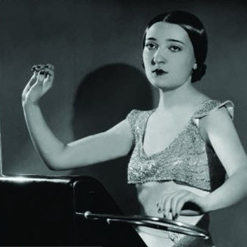 Here she is in her younger days. (I love the concert attire.) The sound of this instrument is clearly otherworldly. It has been used as the soundtrack in lots of sci-fi films like The Day the Earth Stood Still. Remember the Beach Boys “Good Vibrations?” Yes, that was a theremin. And Zeppelin’s “Whole Lotta Love?” DeMille even used the theremin in the sound track for The Ten Commandments. Many modern bands are also using the instrument including Aerosmith, Lothars, and Portishead.

I have always wanted to learn to play this instrument. I bought a $29.95 red plastic version with batteries on the internet and was sorely disappointed. It didn’t change pitch. I have discussed with a friend, who is an engineer, the possibility of putting one together from scratch.

You can imagine my excitement when a few of my students told me that a music teacher in our school had a moog theremin in her classroom. This morning we all went up to her room and anxiously stood in line in front of this innocuous relatively small black box to try our hands at Clara Rockmore-like audio inventions.

The students and I got a real kick out of the sci-fi aspects of it and we did get rather silly with our vibrato gestures around the antenna creating scary weird noises.  BT even discovered that her long hair in the center of the horizontal loop actually made the sounds softer. But we had difficulty managing pitch changes. I am sure it was because we really didn’t know how to play it. (Neither did the music teacher.) There are knobs to control a wide variety of variables like wave lengths and brightness and there wasn’t the space or time for this exploration this morning.

All I can say is that my appetite is increasingly whetted to play this instrument. I am presently crafting an unrefutable argument I will present to the music teacher to see if I might borrow the theremin over winter break. Yes, indeed, I am stung with the theremin.

…If the music teacher says yes, I hope my family is too…

5 Responses to “Sting me with the theremin, loudly.”